All posts and uploads on this message board are strictly the opinions of the individual poster. All music played here is composed and played by the uploading artist.
https://12bar.de/community/

First impressions that any serious player might take away could include: Those gold-plated Wilkinson machineheads and Bigsby B-700 tailpiece offer a touch of refinement (though I will be swapping the arm for a Duane Eddy one) - good to see in a mid-priced instrument". It's lighter than I expected and certainly lighter tahn my 2 sheraton's I've tried recently especially the natural one , the 1960s SlimTaper neck profile is a real joy to play P-90's Well, there's a bona-fide tone guarantor of vintage snap, spank and attitude"; and "Oh, yes, you can see there are decades of breeding, with pedigree Epiphone appointments such as the sloped dovewing headstock."

It has a great spine, with a mahogany neck glued to a laminated maple body, and a rock-solid LockTone Tune-o-matic bridge holding everything in place.

It has a great playable feel, with its classically Gibson/Epiphone scale length and lithe neck accommodating to a fault.

Some people have benn critical of the 3 vol, 1 tone set up, however this is the same as one of my all time favorite guitars the Gibson ES-5. To my mind it's actually 3 guitars in one, follow my logic for a minute and you'll see what I mean.

Its voice is perfect - why more guitar aren't fitted with P-90's I'll never know. The neck unit has a round, bell-like voice that’s not at all wooly—even with the tone rolled back significantly. It also exhibits the same capacity for harmonic detail that the bridge humbucker displays in spades, and feels alive and of a piece with the semi-hollow construction at lounge-jazz volumes—delivering silky-but-spectral, Wes Montgomery-style octave tones and mournful, mellow blues colours and yet let rip and it's certainly capable of of hard rock and southern rock & strong-armed blues without breaking a sweat.

by Blindboy
Very nice! I've always liked those. I love P-90 pickups. I have two guitars epuipped with them, a Casino and a '52 Gibson ES-125, both of which get played often. If I had room for another guitar, a Riviera would be high on the list.

by Fullmoon1971
Here she is with her epi sisters 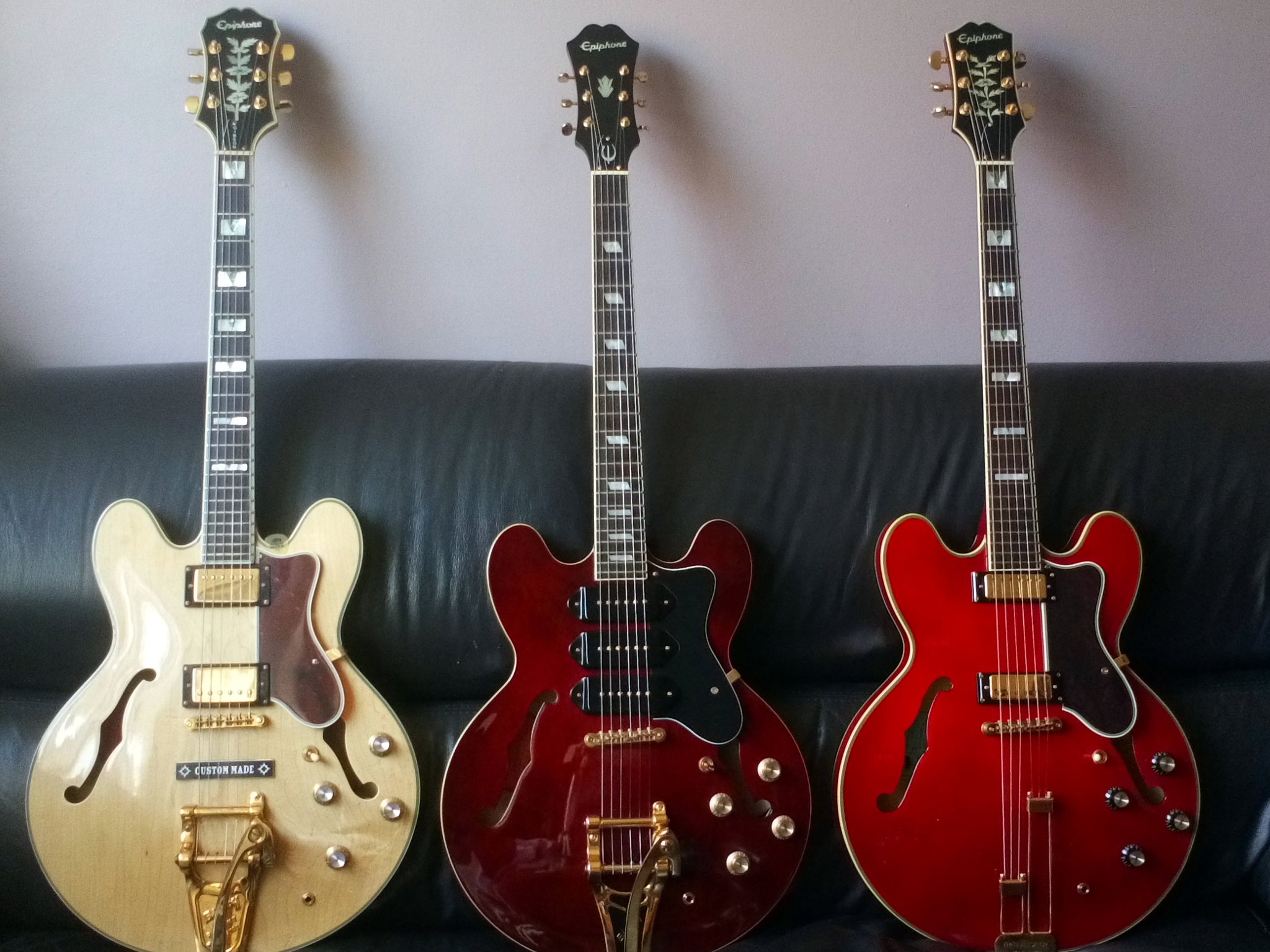 by VikingBlues
Lovely looking guitar and I'm sure with good P90s the sound will be great too. A great looking line up of the sisters too.

I too was baffled when I played electric guitar a lot as to why there were so few P90 pickup equipped guitars around.

The manager of my favourite guitar store at that time told me he really liked P90 sound too, but if he put a guitar on display that had P90s it would likely still be on display a year later. Very weird.

I got a Vintage VSA590 (Casino a-like) through him that had a great sound with P90s. But I traded it in to buy a Gibson SG with P90s - the biggest ever mistake in my guitar buying.

I vowed never to let a label be important to me again.

by 12bar
Great collection, only the Sheraton seems to be missing

by Fullmoon1971
I have one of the 2012 Gibson 50's Tribute SG with P-90's and love it. It has a really thick neck which means no neck whip, coupled with 24 fret neck this thing can do just about anything.

by VikingBlues
I think I got unlucky with my P90 Gibby - or maybe I chose the wrong model variation - it sounded good on it's own and I was initially happy, but I found it could not cut through the mix when playing with others or with a backing track. P90s should certainly cut through. No amount of playing around with tone controls and pick up heights helped. Then when I started to look at tweaking the electrics I found it was all printed circuit board and non-generic connectors. So I would have to rip it all out and void the warranty. Customer support / the seller were no help. Gave up and sold it.

Some years back I had bought a used SG - humbucker one though - and it was a beautiful guitar. Had to sell it for urgently needed funds. I'd hoped for a repeat of that quality. Ho hum.